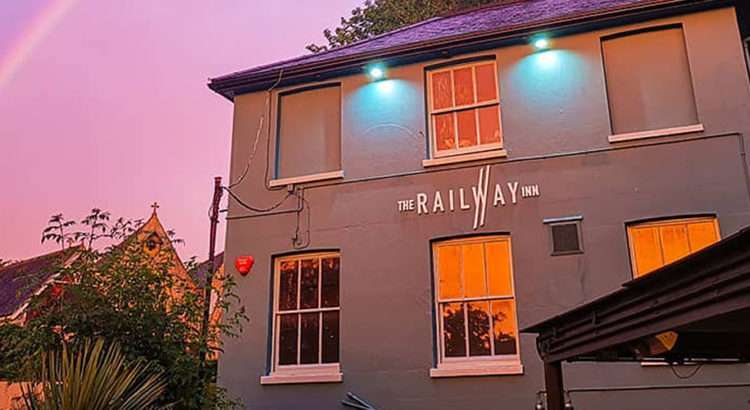 A full-colour magazine to celebrate forty years of live music at the Railway Inn, Winchester. Packed with photos and memorabilia and with contributions from Frank Turner, Kate Stables, Robyn Hitchcock, Laura Veirs, Andy Burrows and many more.

Available to buy at The Railway Inn or by clicking here.

For a brief taste of what it’s all about, read on.

History of The Railway

In the early 1900s, there were two Railway Inns in Winchester. At the bottom of town there was a second train station, serving the short-lived Didcot, Newbury and Southampton Railway (DNSR) and it had its very own Railway Inn in Chesil Street. The two pubs co-existed happily at either end of town until the lower one closed in 1960, which was the same year the rail line ceased functioning and the station was closed. The premises became a Social Club and are currently unoccupied.

It is hard to pin down exactly when the Railway Inn was constructed. The railroad had come to Winchester in June 1839. Fig 1 shows the Fulflood area in 1851. The estate hasn’t been built and all that’s to be seen is the farmhouse and the hexagonal Union Workhouse. In Fig 2 (1871), we can just discern the word Inn on the corner. St Paul’s Hill is still known as Upper Stockbridge Road, while Clifton Terrace is mysteriously marked “Liberty Boundary”. Fig 3 is a larger scale map from the same year, with the Railway Inn clearly labelled as such.  These two pieces of evidence make it clear that the pub was open and functioning in 1871, but the normally meticulous local historian Phil Yates tells us in his book  “Time Gentlemen Please – The story of Winchester’s pubs, breweries and hotels”, that it was built in 1883. Crucially, the 1861 census shows no inn in the street, but by the 1871 census, it has appeared. That narrows down the date of construction to between these times, and suggests it must have been built specifically as a public house rather than been converted.

By 1932 (Fig 4), the Railway Inn is labelled as a PH (Public House) and the road has become St Paul’s Hill.  By now, the Union Workhouse has become something called a Public Assistance Institution and would eventually be St Paul’s Hospital. The inn functioned as a local for railway workers and Fulflood area residents, with the Barn operating as a bottle exchange store.

Legend says that the Barn music room was originally built as a stable for livestock being transported to the nearby train station. An even more outlandish claim is that there was also a brothel on the premises, but I have found no evidence to support this. The Attic acoustic room is said to be haunted by a lady dressed in a Victorian costume, and various ex-employees claim to have encountered her.

In 1942, Number 1, St. Paul’s Hill was the Winchester Poor Law Institution, and at Number 6 resided two nurses, Nurse Parker and Nurse McLaughlin. The Railway Inn, known simply as “Railway Inn, Fulflood” is listed in all Warren’s Winchester Directories until they ceased publication in the 1970s. The landlord in 1930 is listed as George Davis, of Hants, Wilts and Dorset MW Association Ltd.

Alterations in 1927 created the layout as it largely is now, including the new Club Room, but there was no sign of that bar being used for the public (figs 5 and 6). (Courtesy of Winchester City Council: Hampshire Record Office: W/C11/2/2334).

1949 saw an application to turn the yard into a car park. The application came from an architect in Dorset, probably because the owners then were Eldridge Pope of Dorchester. In the submission, they say: “We had the opportunity to purchase the property at the back of the licensed house, which included the yard, and it is our intention at a future date to rebuild this, setting it back from the highway, since it is situated on a very dangerous corner. Until then, we intend that the yard is used for the parking of customers’ cars to avoid them leaving cars on the highway.” No change there, then!

The 1973 Register of Licences Granted in Winchester shows the Railway under licensee Reginald J. Lowe, and there is a note of permission for music from 7 to 10 p.m. This may well mark the day it became a music venue.