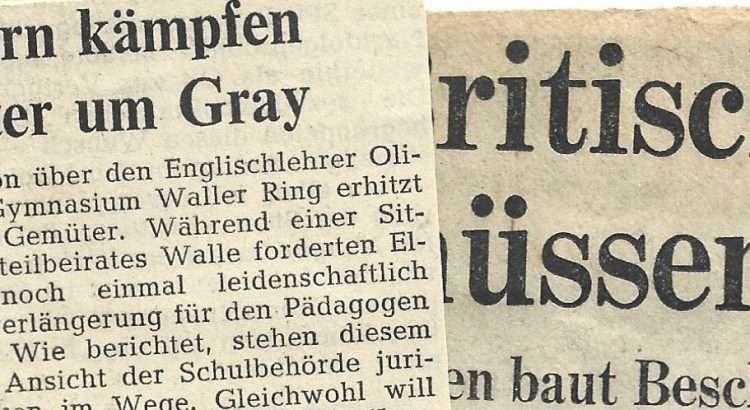 Cautionary Tales from the World Of Education – Oliver Gray’s latest memoir is a frank collection of tales from the topsy-turvy world of education.

Here’s a review by Chris T-T: It’s a superb work; harder-edged than his normal writing, it’s sharply observed, brutally honest and very thought-provoking, yet maintains Oliver’s typical deft light touch. I laughed out loud more than once. Detention has a clear-eyed personal approach to social history that could be useful to educationist types, as well as a bloody great read, just for fun. Despite loving his other books, I was hesitant about reading this one. There was more at stake, somehow. But I needn’t have worried, it’s plain brilliant.

Available to buy direct from Oliver at just £9.99 here.

Available to buy on Amazon by clicking here.

Previous books in the series are:

VOLUME: A Cautionary Tale Of Rock And Roll ObsessionAvailable to buy on Amazon by clicking here.

V.A.C.A.T.I.O.N.: Cautionary Tales Of Travelling Without StyleAvailable to buy on Amazon by clicking here.

POLLY IN MY POCKET: Cautionary Tales Of Camper Van Life
Available to buy on Amazon by clicking here.

For a brief taste of what it’s all about, read on.
Excerpt from Chapter 1.

Every morning, we all had to file in silence into the cathedral for a twenty-minute Church of England service. This was sufficient to make me a lifelong opponent of organised religion. There was a hymn, a lesson, a series of prayers and finally another hymn, before we shuffled out again at the end, to the tones of the mighty cathedral organ, an element that did influence my later life, as I became a fan of the Hammond. None of the hymns, the psalms, the lessons or the prayers made any sense to me whatsoever, so I didn’t believe a word of them.

I still shudder at the thought of those morning services. When trapped in the middle of a row, I would feel nauseous and generally ill. A few times, I had to run out and be sick. To this day, I am so claustrophobic that I have to sit at the end of a row in the theatre or cinema, otherwise I suffer panic attacks. I also, in my early teens, had recurrent migraines, vicious affairs featuring psychedelic flashing lights, double vision and a searing headache. Illogically, a doctor who my parents consulted dignosed appendicitis, and my appendix was duly removed. As I had absolutely no symptoms of appendicitis, I have often thought that the surgery was probably unnecessary and that the innocent appendix should still be in place.

Among the many things that baffle me about my father’s decision to send me to that school is the fact that he was a lifelong non-believer, in fact quite scornful of Christianity, yet here he was, submitting me to a daily diet of it. Trying to analyse it now, I believe that, as a historian, he liked the idea of me being associated with something that had a long tradition, and he also hoped that all those Oxbridge-educated teachers might turn me into some kind of academic. In actual fact, it was probably the aforementioned snobbishness that was the most important factor, and this was the only private school in the area that was vaguely affordable.

Christianity was a significant part of the education provided at the school, but in a rather odd way. We had several lessons each week of Divinity (now it would be called RE). RE, I think, offers comparative studies of religions, whereas this was simple Bible Study or, put more clearly, indoctrination.

Our divinity teacher was known to us as Holy Joe. His lessons feature particularly strongly in my memory. It surely can’t have been that we had more divinity lessons than any others, but that’s the way it now seems to me. He was very short and rotund – I think of him as the shape of the Mister Men. He would rest his hands on his stomach as he took it in turns to humiliate us. He gave each pupil the name of somebody from the Bible. I inevitably was Obadiah. Almost everything he taught us was from the Old Testament, and he had a kind of cynical approach to it, whereby he would convey the whole thing as some kind of ludicrous joke, which of course it was.

Despite the fact that he was so jovial and “unholy”, he was also prone to terrible mood swings. Without warning, and for no apparent reason, he would suddenly switch from an apparent state of jovial calm to an uncontrolled red-faced spittle-spurting rage. Propped up next to the blackboard was a cane, and at least once each lesson, one or other of us would be hauled out by the scruff of the neck to the front and battered on the behind with this very painful stick. Upon completion of the punishment, he would switch back to his smarmy smile and continue the lesson as if nothing had happened. Despite being an almost pathetically well-behaved pupil, this happened to me several times.

What would normally occur would be that he would make some joke. This would encourage us to think he was in a good mood, and we would respond in a jocular way. He would then take exception to our smiles and pick one of us, seemingly at random, for the public punishment. Presumably he gained some kind of short-term satisfaction from this, which would, until the next time, restore him to his original state of relative equanimity.

This is a good point to talk about the general concept of corporal punishment. In that school, as in most secondary schools at the time, it was considered completely normal. All the teachers had a cane to hand, and when I look back now, the ones that I respected never touched their sticks and the ones that I hated, feared and scorned were those who wielded them as a matter of habit. You never knew what might offend them and spark them off, so you constantly lived in a state of heightened tension. Sometimes the beating would be administered in front of the class. You had to be careful not to yelp too loudly, as that would qualify you for an extra stroke. On some occasions, you would be hauled out of the classroom into the corridor outside, but the worst times were if you had done something considered really bad and were sent to the headmaster for a full-on beating, known as “six of the best”.

The headmaster dealt me a six on several occasions. His technique was to do a run-up across his office, so you could hear his feet approaching, before the frankly agonizing contact of the cane with the quivering buttocks. On a couple of occasions, I showed my wheals to my mother on returning home and could see how upset it made her. It must be awful seeing your offspring being injured, but of course she never said anything to the school, despite sympathising with my sense of injustice. It was simply considered a normal thing to happen, and in my parents’ case, of course, they were paying for it.  It did contribute to my education in a significant way, however, because it made me resolve never, ever to inflict punishment on another human being, adult or child, and in my entire life I have never hit anybody.

I think my father would have described himself as a disciplinarian, but he didn’t physically punish me on any kind of regular basis, which was quite unusual for parents in those days. I remember very clearly the only time he ever formally hit me. I guess I must have been about ten years old and took it into my head to sit on the window sill outside my first-floor bedroom. I think what happened was that he was completely freaked by the thought that I might fall and injure or kill myself, and that sparked off the only response he could think of, which was to take off his slipper, ask me to bend over and thump my bottom with it several times. The scene must have looked hilarious but, as a punishment, it wasn’t very effective, because it didn’t actually hurt. On the other hand, it did cure me of sitting on window sills, because I was so shocked by his emotional response. Since then, I have spent a lifetime of being ultra risk-averse.

Astonishingly, at school, certain prefects were allowed to cane younger boys. There were two categories of prefect, a House Prefect and a School Prefect. I think the concept behind it was to engender a sense of leadership in certain older pupils, in which case it was a complete failure, because it created a bullies’ paradise. Those thugs were given a sense of entitled power, and took great pleasure in wielding it on small, quivering adolescents. As I was a particularly diminutive and wimpy teenager, I was a sitting duck, and developed an intense hatred of those sadistic bastards. If they were in a good mood, they would administer non-physical punishments, and had the power to hand out detentions and lines. Detentions consisted of staying behind after school for half an hour, sitting at a desk and staring straight ahead. You weren’t even allowed to get on with your homework or do something sensible or useful with the time. Lines were an even more pointless and time-wasting punishment. To keep myself from dying of boredom from writing a hundred times, “I must not speak during assembly” or “I must always walk on the right in the corridor”, I would write a hundred times “I” first, followed by a hundred times “must” etc, which, for some reason, made the task easier.

For me personally, there was an issue, on entering the Sixth Form, that was yet another consequence of the “Double Remove”, that had taken place back when I had been eleven years old. Because I remained a year younger than everybody else, I was correctly considered immature and not made into a House Prefect, while everybody else in the class was. By the  following year, I had actually turned into a bit of a bolshy rebel, and was considered so anti-authoritarian that I never got made a prefect at all, until the ridiculous extra term that I had to do because the idiotic headmaster fucked up my application to Cambridge. As I now, ironically, was the oldest boy in the school, they were forced to make me a prefect, and I took great pleasure in not issuing a single punishment during that period.